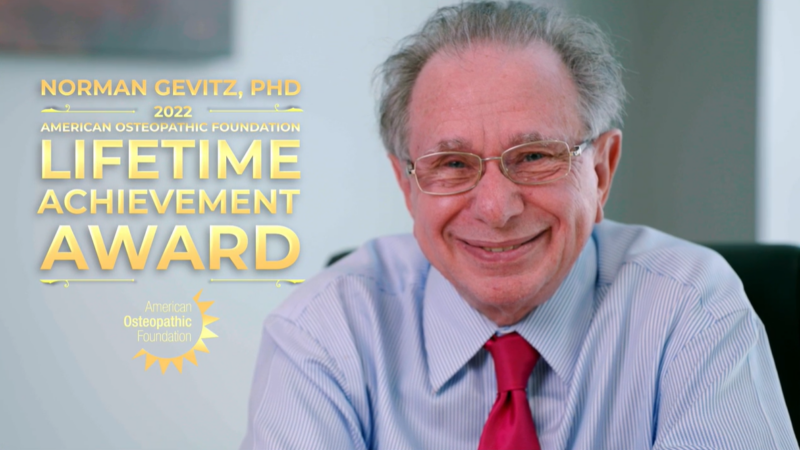 The AOF is proud to recognize Norman Gevitz, PhD, as the 2022 Lifetime Achievement Award recipient.

The American Osteopathic Foundation (AOF) Lifetime Achievement Award is given annually to one whose extraordinary accomplishments and service bring a sense of pride to the Osteopathic profession and achieves greatness through integrity, commitment to service, generosity to others, and community involvement. The AOF proudly recognizes Norman Gevitz, PhD, as the 2022 Lifetime Achievement Award recipient.

Dr. Gevitz is a medical historian and scholar of the Osteopathic medical profession and its place in American medicine. Notable publications include the book The D.O.s: Osteopathic Medicine in America, Beyond Flexner: Medical Education in the Twentieth Century, and Other Healers: Unorthodox Medicine in America. He has also written countless chapters for Osteopathic and other medical textbooks and received a grant from the National Institutes of Health for his work, “The Origins of American Medicine: New England, 1620-1723.”

He is currently Senior Vice President for Academic Affairs at A.T. Still University of Health Sciences in Kirksville (ATSU) where he is also a professor of History & Sociology of the Health Professions. He previously served as Director of the New York Institute of Technology’s (NYIT) Academic Medicine Scholars Program, as Professor of NYIT’s History & Sociology of Medicine, and as Associate Director of its Health Policy Fellowship Certificate Program.

He earned his bachelor's and master's degrees from New York University and his Doctorate in Sociology from the University of Chicago. Recent honors include NYIT’s Standard of Excellence Award and the American Academy of Osteopathy’s Academy Award for Public Service.

The AOF Lifetime Achievement Award was established in 2006 to honor an individual who has made significant, fundamental contributions and whose work has had a notable, lasting impact on the Osteopathic profession, its principles and practice.